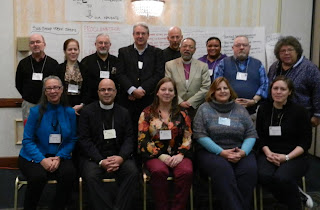 I've just returned from a gathering in St. Louis of the Committees, Commissions, Agencies, and Boards of The Episcopal Church, where some 200-250 people gathered to advance the work of the church.  I serve as the Executive Council liaison to the Standing Commission on Mission and Evangelism (SCME), and I found myself in the room with some very bright and passionate people.  Here's a nice picture of them! This group was ready to roll up our sleeves and get to work empowering Episcopal evangelism and mission.  When you gather so many talented people together, it is always an opportunity for synergy, for the Holy Spirit to begin to blow.

Yet we immediately ran into a roadblock, and that was the very nature of our mandate. Pay attention here, Restructure Task Force Players-to-be-Named-Later, because I heard a similar frustration coming from members of at least four other CCABs. That frustration is this: CCABs are not actually supposed to DO anything.  All we are supposed to do is think up ideas and draft legislation for the next General Convention to approve or reject.  Here is the stated mandate of the SCME:

CANON I.1.2(n) (4) A Standing Commission on the Mission and Evangelism of The Episcopal Church. It shall be the duty of the Commission to identify, study and consider policies, priorities and concerns as to the effectiveness of The Episcopal Church in advancing, within this Church’s jurisdictions, God’s mission to restore all people to unity with God and each other in Christ, including patterns and directions for evangelism, Church planting, leadership development, and ministries that engage the diversity of the Church’s membership and the communities it serves, and to make recommendations to General Convention.  (emphasis mine)

Get it? You gather a group of bright, talented leaders in the church, experts in their various fields, representing the diversity of the church in age, ethnicity, ordination status, etc., get them excited about a particular area of mission, and then tell them they can't actually DO anything. You pay $1,100 per person for an in-person meeting of hundreds of people, to be repeated at least once and maybe more during the triennium, and the end product of all this work is ... The Blue Book?

Look, I am a General Convention nerd, and I like the Blue Book (whatever color it happens to be) as much as anyone. But is legislation really the appropriate work product for such an amazing and talented group of leaders spending that much time and that much money?

If so, let's follow a chain of events through to their natural conclusion. Last triennium, at the end of its three years together, the SCME proposed several resolutions, including A072, (to see the resolution, click here and scroll down to A072, then click “English current” on the right-hand side).  A072 adds a canonical requirement that new ordained and lay pastoral leaders be trained as missional leaders in evangelism, cross-cultural competency, non-profit leadership, empowering lay leadership, etc. Terrific, right? Such training could provide great hope for a new generation of leaders now emerging.

But how are dioceses and seminaries supposed to provide such training? Should each one reinvent the wheel in its own way? Under our polity, they certainly have the right to do so (and some will choose simply to ignore the new rules). But maybe it would be helpful to overworked leaders to have some common resources to draw from should they choose to do so.  And in fact, there are a number of groups working on missional leadership development across the church. Wouldn't it be a great idea to get them together and encourage them to share or even create a set of common resources, even possibly a curriculum, in missional leadership training, that dioceses and seminaries could draw from?

When this idea was proposed, it got a lot of energy. Yet then someone reminded us of our mandate: we're not supposed to DO stuff (like gather people together to follow up on A072 and share resources), we're just supposed to write a Blue Book report.  The only time a CCAB is allowed to DO something is if past GC legislation specifically directed them to do it (and there were no specific directions in A072).

So if the SCME thinks a leadership development gathering should happen and a curriculum should be developed, we should, I guess, write a resolution, hope it passes in 2015, hope it gets funded sometime, hope it gets put at the top of some 815 staff person's priority list (should there still be an 815 staff person at that time), and hope the gathering happens by 2018 so we can start training the post-Millennial generation to be missional leaders by about 2022.

It was at this point in our group's discussion that I made the following point, which I subsequently tweeted:  We are not over-burdened in The Episcopal Church with too many people doing evangelism. Let's go ahead and do it now.

(For the benefit of those who are concerned about the "rules," we found a way to make our gathering fit within our mandate. It could be possible if we get grant funding from outside the TEC budget, which we will apply for.  And the end product of the gathering can certainly be "advice" to General Convention. I'm sure we will write a resolution of some sort. But how silly, really, that a proposed resolution is the only acceptable outcome of our work.)

Here's the point: if we are appointing members of CCABs to talk about a subject, and they have some helpful ideas and the energy to accomplish them, why not use this set of talented and passionate leaders to take action right now?

I'll tell you why not. Because we have somehow gotten ourselves to the point where we think that legislation is an effective form of ministry.  That if something is important, it should be decided by a cumbersome and expensive legislative process, complete with officially sanctioned committees, proposals, amendments, rules of order, and majority votes. That the proper function of General Convention is to micro-manage every aspect of our common life, and that nothing can be done until General Convention agrees to do it.

(Which is why, for instance, Convention had to vote last year on many supplemental but unnecessary liturgical resources created by the Standing Commission on Liturgy and Music, which some 1,000 deputies and bishops had to read, critique, and vote on.  The SCLM couldn’t just create lovely resources  and submit them to Forward Movement or Church Publishing for people to use if they wished.  Their work could ONLY result in legislation of “official” resources.)

There ARE things that legislation is vital to achieve. Ordination of women, a process for Title IV disciplinary proceedings, ordination requirements, blessing of same-sex unions, revision of the prayer book (but please God, not anytime soon!), funding and budgets - all these are vital issues of church policy that our legislature should decide. Legislation is necessary to decide what the rules are, what the boundaries are, how much money we have, and what we are NOT allowed to do.

But the belief that legislation is necessary before anyone can do any actual ministry is, I believe, a sign of high anxiety in our church.  If we don’t believe the Holy Spirit is calling us to do something, or if we have no idea what God is calling us to do, we fall back on administrative permission-giving, rules and procedures.  Don’t know how to do evangelism?  Let’s write legislation about it!  Until the legislation is passed, though, no one better take an unauthorized step to empower evangelism!  It might be against the rules!  (Which was not a concern of Philip’s in Acts Chapter 8, I might add.)

Restructure Task Force, pay attention. Let's restructure ourselves to encourage ministry, not limit it and frustrate it and shut it down when it threatens to appear, like in the CCABs that are yearning to take action, not write legislation. Let's limit the legislative work of General Convention to matters that require it, such as finances and boundaries.  (Hey, maybe we could even reduce General Convention's length!) Let's gather leaders in CCABs, yes, but let's empower them to do non-legislative ministry. Especially as we move away from a strong-staff structure (because budget cuts will mean more staff cuts are coming), let's let the volunteers who are passionate about the work of the church DO the work of the church. Let's let the Holy Spirit blow.  Because this time in our church is a time for the Holy Spirit. Not a time for legislation.
Posted by Susan Brown Snook at 8:52 AM